In a nutshell: waiting to go there, waiting for a table, waiting for awesome, still waiting… Given the daily queues for this place I doubt this review will hurt them one bit.

Food: four words… SOFT SHELL CRAB BURGER.  Pretty as a picture, if you can leave it long enough to take one. At $12, this could be Melbourne’s best and tastiest brunch bargain.

We also ordered the duck egg, oyster mushrooms, truffle butter etc. Again, points for presentation, however this one didn’t live up to the hype. It wasn’t offensive – quite the contrary, it was highly edible. It just wasn’t ‘WOW’. The oyster mushrooms seem to be more of a texture choice, not really adding any real taste to the dish.

Lastly, which in hindsight may have been a mistake, we had the corn. Why go to a fancy cafe and order corn, you ask. I think I am a sucker for a well-described dish. This didn’t appear as merely ‘corn’ on the menu, it read bbq corn cob, popcorn butter, pecorino, lime ($9). I think the popcorn butter and pecorino (which I had no idea was cheese) got me. Another underwhelming dish. 3/5

Coffee: didn’t catch the beans they use. I ordered a single origin pour over. It was a little bit hot which caused the coffee to be bitter. It settled down when it cooled and was acceptable. 3/5

Vibe: they’re clearly going for uber-cool. Whether they achieve it is debatable. It’s a weird space… narrow and a bit cramped. Wait staff look like they just stepped out of a modelling audition. That said, they are friendly and served us well. The door guy doubles up as a waiter and is pretty frantic as he moves on people once their meals are done and invites new people to fill the void. We got a little tired of waiting, especially when this place doesn’t quite deliver on its reputation. 3/5 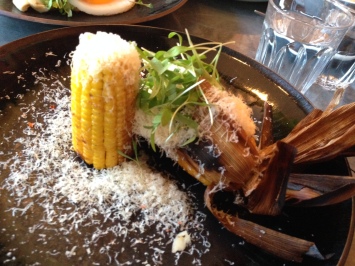