In a nutshell: the best brunch cafe in Kensington bar none.

Food: I scanned the menu up and down but couldn’t seem to find anything that took my fancy. Then I laid eyes on the corned beef and potato hash with sauerkraut, mustard aioli and a poached egg. I probably don’t need to tell you how delicious this was for the description alone inspires salivation. But I will. The charred corned beef were like nuggets of gold buried amongst the sauerkraut, which by dish’s end was smothered in gooey fiery red egg, which minutes earlier perched proudly atop the brunch masterpiece. An aioli moat lay at the base of the food fortress, however would have been of little use in battle given how tasty it was (and the fact there was nothing to protect after just five minutes). This was one of my favourite Melbourne brunches.

Usually when my wife and I do brunch, one of us gets food envy. Not so at Premises. Both of us claimed to have the best dish. She ordered the Mushies and Greens, which consisted of delectable mushrooms scattered amongst kale, seasonal fungi and a poached egg – all on buttered, crunchy organist multi-grain toast. “It was just literally delicious,” she said. “It was well seasoned and had this chilli kick. It was amazing.” The menu appears a little “salt heavy” with plenty of salty options, but this shouldn’t be viewed as a bad thing. There is an ad in the window for a new chef. Seems the current one is doing ok. 5/5 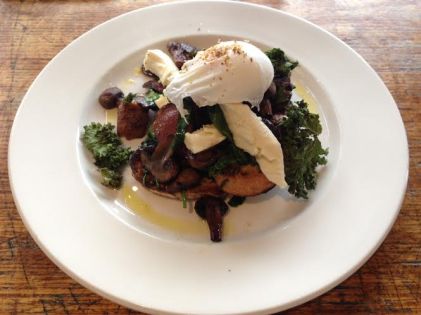 Coffee: the folks at Premises take a lot of pride in their coffee. When we went they had three single origin options, two from Africa and one from South America. The providers were Seven Seeds and Market Lane. I ordered the Rwandan one from Market Lane. I have heard good things about Market Lane but never had their coffee. Fair to say, I’ll be having them again. The V60 pour over was brewed to perfection, bringing out the rich raspberry character of the beans without being too overpowering. I will be back to try the other ones. 5/5

Vibe: this place probably won’t win any awards for interior design but what it does have going for it is there are a number of spaces to sit plus about 10 tables on the footpath. It’s a great place to sit in the window and watch the Kensington locals go about their business, or just chill and chew the fat. 4/5

Service: decent enough. The girl behind the counter (owner?) came out to apologise for the lack of tasting notes (I must have looked like a wanker) after they had all been stolen by other customers. She was manually typing up more (respect!) 4.5/5